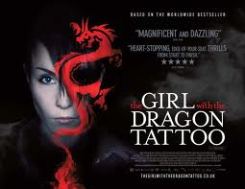 Sometimes, you read a book and it fills you with this weird evangelical zeal, and you become convinced that the shattered world will never be put back together unless and until all living humans read the book. The girl with Dragon Tattoo is one such thrilling novel.To be honest i was  awestruck after I  read this MILLENNIUM TRILOGY , a crime novel by the late author and journalist STEIG LARSSON (Also, now a popular movie) . The book is highly complex , engrossing and equally frustrating because every time one mystery is solved another just crops up and leaves you wondering and wanting for more. For those of you who are planning on reading this book , there’s one advice that i would like to give.  : DO NOT GET DISAPPOINTED after reading a few pages because this book does require a lot of patience for starters. I almost put this book down so many times due to  lengthy expositions and too many details about too many characters but, and this is a big BUT, once i finished reading 45% of the book , i simply couldn’t put this book down.

The story starts when Mikael Blomkvist, the editor of an investigative financial magazine called Millennium is found guilty of libel by a Swedish court for the article he published about a shady financier. The dense back story on Blomkvist’s predicament unfortunately slowed down the narrative to the point that I began to wonder whether the book may have been overhyped. But twenty pages into the novel when the intriguing Lisbeth Salander is introduced, the story takes off like a rocket.

Disgraced and derided by the Swedish press , Blomkvist takes a temporary leave of absence from Millennium.Out of work, he is hired (enticed actually) by Eric Vanger of the venerable Vanger Corp to investigate a cold case that happened thirty years before: the disappearance of sixteen-year-old Harriet Vanger, the likely heir to the Vanger fortune. Blomkvist accepts the job and searches for an assistant to help him with his research.

Enter punk-haired and severely underdeveloped Lisbeth Salander (yes, the girl with the dragon tattoo, among her other body art), a mistrustful, anti-social, and oft-violent twenty-five-year-old woman who has been declared mentally incompetent by the state and placed under guardianship of a state-appointed lawyer. What the government doesn’t know is that Salander is highly intelligent, a kind of wonder girl, who secretly works as an investigative researcher for the biggest security firm in Sweden. Through his unthreatening wiles, Blomkvist is able to earn Salander’s trust and the two of them embark on an investigative journey that uncovers a sinister Vanger family history that eventually endangers both their lives.

This novel describes the life of a very VERY special investigator agent.
She has no sort of past high school education but has the intellect and writing skills of anyone with post college education. The name, Lisbeth Salander. one of the most interesting characters brought to the written world. She is not your typical girl, she’s a lanky young adult with an edgy style impossible to not define from miles away. She comes across as someone who needs to be attended with help, but once you get passed all the judgement and her reasoning, you begin to connect and understand her life almost like a good friend. Not only does it discuss about Salander and her life, but it also incorporates the case she has been set to do. The best part about this book is that it connects her life and Salander’s past experience with her job so much. Definitely , A GIRL OF MANY THOUGHTS.

The story that unfolds is as dark and cold as Sweden itself, but will never, for one moment, bore or cease to surprise you. There is a lot of sex and violence, often combined in graphic prose. Even outside of the main plot, Salandar’s story is a dark, intriguing enigma in itself.

The Girl With the Dragon Tattoo is highly recommended for the reader who likes smart, complex puzzles and unusual, complex characters. You won’t quickly forget Blomkvist or Salandar.I didn’t and i often think about these characters.

I exist between the pages of a book. If you've written something and would like someone to edit or review the manuscript, I'm your person. View all posts by Shumaila Taher